On Saturday 11th May 2019 I completed my first half marathon event, it was just over actually at 22.5k and is almost 3x longer than any event I have completed so far.

I arrived at the start line a few hours earlier then the half was setting off so I could catch up with Andy and Charlie who were taking part in the Ultra and Mel who was also doing the half. The weather was a bit overcast and threatening to rain, so I decided to have a breakfast baguette from the catering stand and work out what layers I would wear and what I would send in the van to the finish line in the 3 hour wait between the Ultra/Marathon wave and the Half. It’s a good job I waited as not long after the 3rd wave had set off the clouds parted to reveal a lovely blue sky, which would stay with us all day despite a few quick light showers. 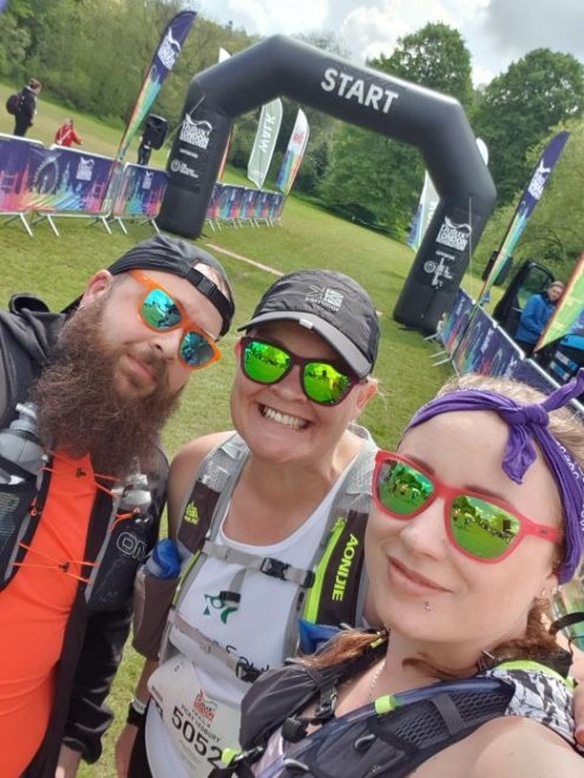 I had never experienced a Threshold Events pit stop so I walked down with Mel and Vicky to check out the 3rd pit stop for those doing the Ultra, I have to say I was impressed by the selection that was available. It’s like the best parts of a children’s birthday party, just without jelly and ice cream.

Then we were off, my plan was to run/walk maintaining a pace of about 11:20 per KM, this would (by my basic understanding of pacing) put me at about 4 hours for the half and hopefully I would have enough energy for a sprint finish. Nutrition wise I had a Beet it shot and Maurten drink mix before the start, gels to be taken every 40 minutes, some jelly beans and flapjacks for when I wanted something solid.

For the first 14k it all went to plan or somewhere between my dream plan where I go sub 4 and my realistic more within my abilities, bearing in mind that most events I do are 5k this was all new territory. The only other time I did this kind of distance was for a virtual medal that I really liked and I spent most of the day doing it, stopped twice to eat meals and bumped into a sales rep who gave me an impromptu training session on custom moulded insoles. Yet moving time I ended up with a time of 4:46:12.

So in the first two thirds of the run I beat my 1k and 10k records, first one by a second or so and the second by a few minutes. Really happy with everything, my calves were tight in the lower part. Especially the left one which is usually tight from the arch of the foot and is something that I have been working on improving through foam rolling and other techniques, but no pain like I would have had previously. I entered the area marked as pit stop 5 on the route, going through my little routine of filling my water bottles making sure to thank every volunteer present, transfer my rubbish (and other runners rubbish that I have picked up) to the bin, pick up a gel, pour a flat coke into my trail cup, pick up a snack if something takes my fancy, fill trail cup with water to rinse it, use toilet if needed and do a quick check to make sure I haven’t left anything I didn’t mean to and then hit the trail again. Immediately I would tell myself off for not pausing my Garmin and then reminded myself that this is a new experience, one that I will learn from and to get back to my target pace.

It was coming up to 15k and that’s when I had my first experience of the phenomenon known as “The Wall”, I knew I was going to come up against it sooner or later in my running journey and when it hit I have to admit that it knocked me back.

I was just coming up to a bench so I sat down for a few minutes to process it, my own experience of it didn’t feel like an immovable object but felt more like during rugby practice running at the pads and having to really pump your legs to make any ground. I then went through my pre race scenario planning, I wanted plans in mind so I wouldn’t have to try and come up with something on the spot when tired. My plan was to slow my pace by a minute and take on gels every 30 minutes to get me to the finish. So up I got and started to move, I knew I had another pit stop between me and the finish so I could get help if I needed it.

I think I managed about 1k from hitting the wall and worked out that on my adjusted plan it was gel time, I reach into my gel pocket and pull out one of the special GU gels I brought at the Marathon expo after trying some at the Triathlon show. It was birthday cake flavour (I had meant to have it doing a run a few weeks before on my birthday but went for cocktails and steak instead) and I had just finished it when Charlie came past me, that made me laugh because it was actually her birthday and I given her a birthday cake gel before the race. We exchanged greetings and off she went, setting herself a nice shiny PB for a 50k distance.

The final pit stop was a welcome distraction as my pace was getting slower and slower, I had decided that I wanted to finish no matter how long it took me and when I set off again it felt like a few more rugby players with the pads had joined in to push back. The cramping in my calves felt like it was starting to rise up my legs and all I could think about was getting close enough to the finish line so that when Andy caught me up and I genuinely believed that it was going to be when and not if Andy caught up, that when he did catch up would have helped me power through to the finish. 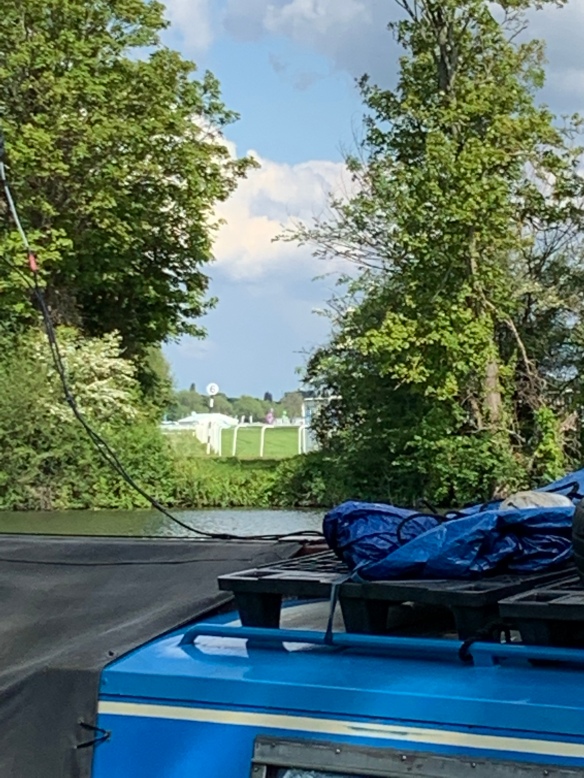 As you pass Dorney Lakes you can start to hear the finish line, it gave me a bit of a boost hearing the commotion and seeing the flags. This is short lived because your on the other side of the river, I know that I am not the only person who contemplated swimming across. For me the next 1k felt the toughest, you had come to with a few hundred metres of the finish and now your moving away from it. It was now that it felt that everything was annoying, my shirt rubbing around my arm pits, the vest was rubbing around my neck and the bounce had dislodged one of the mounting points, this put the pack into a skewed position.

At last the bridge came into view, 2.5k from the end and from here on it was on road. Following the arrows I zigzagged a bit, dodged a pushchair blocking the pavement and was soon in Windsor Race Course. 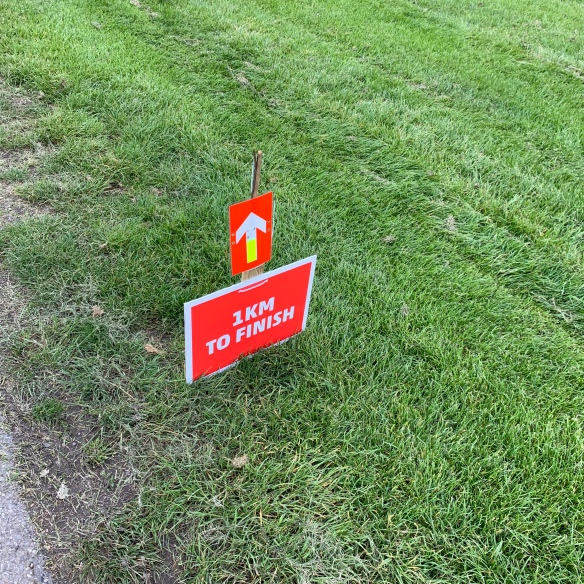 I could hear the finish line tannoy announcements, I was getting closer and then you see the 1k to Finish marker. Ahh not as close as I thought, the cramp still rising I pushed on and may have been talking or singing to myself. Route swings round to the right away from the direction of the noise, I keep looking back imagining I am hearing my name being called and seeing no one I know. Round a few more corners and flags start to come into view, I can now hear the party going on. I hear my name being called, but it’s from towards the line and it’s not Andy. I am scanning the faces and I spot Mel and Vicky, I pass them High 5’s exchanged. I cross over the finish line to a chorus of cow bells, a medal gets hung around my neck and I start looking for the baggage pick up, I just wanted to take my shoes off and slide into my Oofos.

I put on some of my warm layers and pack my kit back in my bag, still a bit shocked that I had achieved it. I hadn’t done any running since before my last event when I had fallen ill a week before it and decided to take a break after that event, so was more shocked to see that I had set a new PB of 4:22:38

Before long Andy appeared at the end of the finish funnel and the announcers made a big deal about his calf’s (challenge accepted, I am going to bring a whole new level of calf game for next year!), then we celebrated as a group. 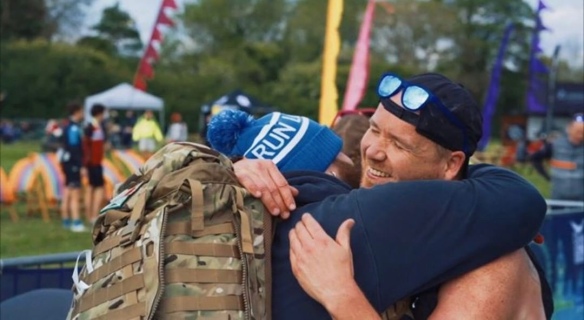 I have done very few events with friends up to this point, I had been at the same events as people I follow on Instagram who I was too anxious to go and introduce myself to, but the feeling of community brings a new sense of fun to this for me. 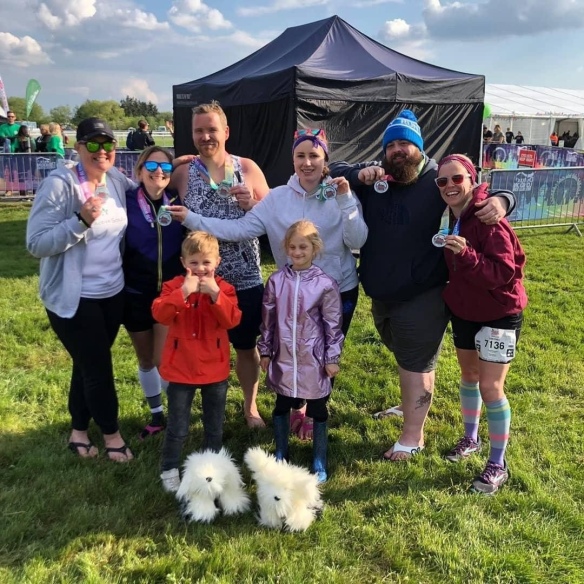 What I learnt from this event: