I have written, edited and deleted the intro to this event a few times, it has been a very polarised experience. Pre race could have been better after spending a good 40 minutes queuing from bag drop, through the toilets and finally getting started in my wave about 10 minutes after it’s advertised time. But that’s what I expect at such a busy and perhaps oversubscribed event. Out on the course I had a good time and met some great people at the back of the pack, setting myself a new 10k PB in the process.

However it’s once I crossed the finish line that what had been a good day started to fall apart, seconds after crossing the line we were approached by some volunteers with clipboards. “We are really sorry but we have run out of Medals, Finisher shirts and Goodybags. Can we take you name and race number and we will send them out to you?” Ok it’s not what you want to hear after you finish an event, but at that time I was just happy that I didn’t experience what happened to the 7 hour 30 minute official pace group at the London Marathon a month earlier, the course wasn’t packed up ahead of us and we weren’t abused. It shouldn’t happen, I selected my finisher shirt size nearly 6 months prior and you know how many people have signed up in advance.

In the bag drop area I asked a stranger if I could borrow their medal to take a picture with so I could at least have a picture of myself with a medal from the day. 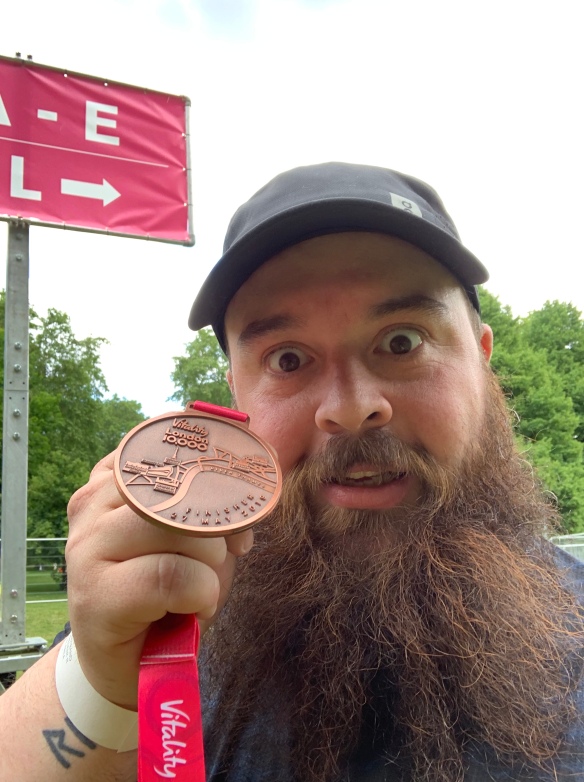 I collected my bag from bag drop, which was much easier than dropping it off before the race and went off to find my wife who was waiting for me in Green Park. She was having her own drama after taking a piriton because of the pollen and then falling asleep in the sun.

We got the train home and chatted with another runner who asked where my medal was, he said that when issues like that happened in the past at other events that normally places for a future event are sorted out to make up for it along with sending out the medals and finisher packs.

A few hours later I had an email from London Marathon Events:

Today, for the first time in the history of the event, we gave out gender-specific and sized finisher T-shirts at the Vitality London 10,000.

We try to ensure we have enough T-shirts and finisher medals for everyone without over ordering as part of our commitment to sustainability. We had a record number of 19,465 finishers and we’re very sorry that some runners did not receive their T-shirt or medal.

We know you were one of the runners affected and we will be in touch again within 10 days to let you know when we will be sending them out.

Our apologies again and we hope, despite this, you had a great day.

The first thing I noticed was that they didn’t even use a mail merge to personalise the message, it gave me the impression that this was merely an inconvenience. That because a few thousand more runners, who would have been signed up in advance so again it should not have been a surprise that they turned out on what turned out to be a nice sunny bank holiday Monday meant they ran out of stock because the usual calculations they make on how many places they offer against how many people turn up was wrong.

Within the 10 days they provided an update, still not personalised with a simple mail merge that it should be another week for our medals and by the end of the month for the shirts to be printed. When the medal came it was just in a brown envelope, no apology note or anything.

The worst part of the experience came when the supposedly genuine New Balance finisher shirt arrived, the first thing I realised was it was not the size I ordered. There was something else about the shirt that didn’t seem right and then I realised that the finish of the shirt was poor compared to any of the New Balance gear I owned, or indeed any of the New Balance gear I have ever seen from working at Runners Need. When I had the opportunity to compare it to a shirt that was picked up on the day I was able to spot a few more things that in my mind confirms that it’s not a genuine item they have sent out to the runners who missed out. 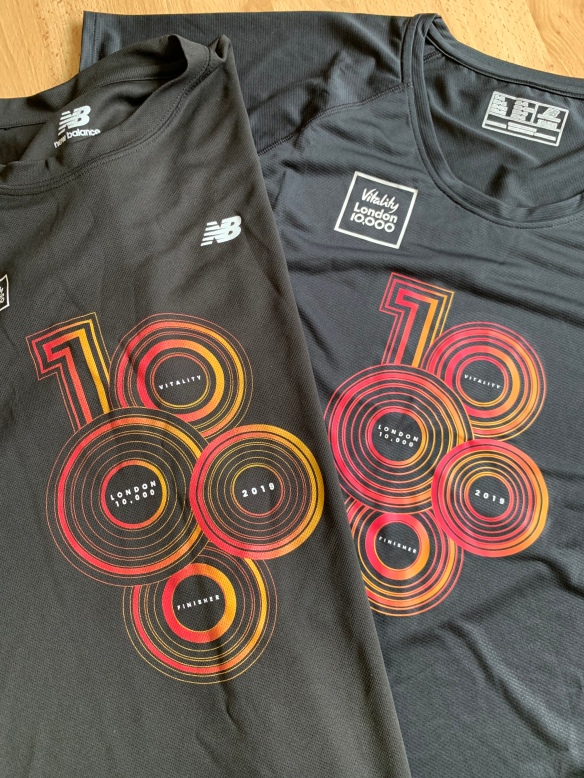 The shirt on the left has a rough finish on all the printing along with a slightly different design, it also doesn’t have the same size information print that every New Balance item of clothing I have owned has. While it’s not shown in the picture the shirt on the left does not have the reflective patches on the sleeves that the shirt from the day has. 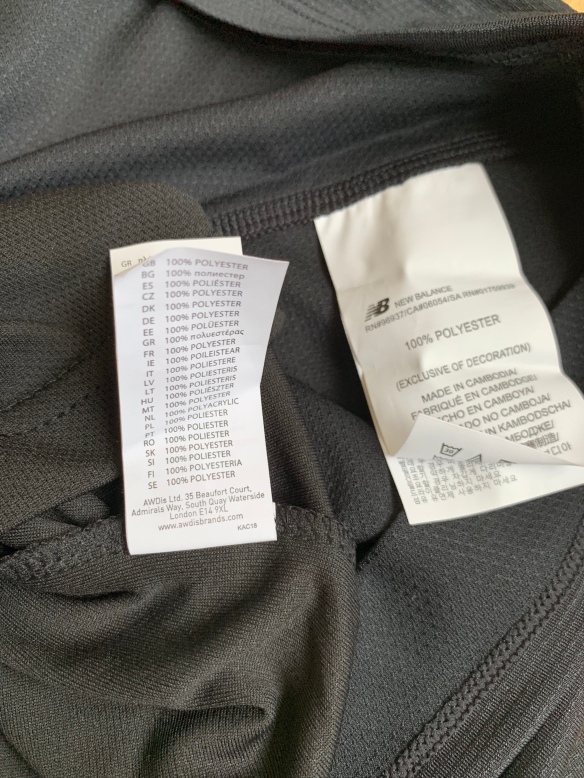 I don’t even think I need to explain the difference between the two labels, but I am sure that both should have New Balance labels?

Given how that in the same week I received the shirt it was announced in the news that the runners affected at the marathon have been offered free places for next year, I feel that the way London Marathon Events Ltd have handled issues that have affected the back of the pack community in two consecutive events has been totally different. The one from the headline event that got loads of media coverage has been handled the correct way in that they have sought to correct the experience compared to the lesser known issues from an event where media coverage is limited to how the elites performed and the solution appears to be along the lines of let’s just get them a tshirt to keep them quiet.

I had volunteered at the marathon this year and work schedule permitting would have done so at some of their other events, but I don’t feel like I should give up my time to provide a level of service to other paying customers of theirs than what I have experienced from them as event organisers. The volunteers working that day did an amazing job, it’s just that the organisers appear to have got it wrong when calculating how much to order in advance of the day and have shown an unwillingness to take ownership of the negative experience and have as yet not offered us the opportunity to return next year as their guests to show us that they can do it right.

If you need to report an instance of receiving a counterfeit New Balance item you can do so by emailing counterfeits@newbalance.com
or calling 0808 101 2828.